Upon returning from a family vacation at the end of May, 2015, I was catching up with my website email. In the emails, I found a curious invitation from a church leader in Kenya–to speak at their April, 2016, Pastors and Church Leaders Conference on the topic of:  Biblical Gender Equality.

I was delighted to be invited to speak on this important topic, BUT: Was this a legitimate request?  And, what actually might be involved in getting me over to Kenya in order to make such a talk happen??  These were my initial questions as my mind and heart grappled with the potential of this being a doable God-thing, or not!  This international request was certainly alluring and I was immediately intrigued with such a prospect.

Over the next number of months, I was getting to know this pastor/overseer of a group of churches with their home base in Eldoret.  I also received confirmation from a number of American church leaders who had been there to speak at various pastors conferences over the years on timely Christian leadership topics.

I felt that this church leader was certainly progressive in wanting someone to speak on the topic of Biblical Gender Equality in his country–since Africa has been patriarchal for eons.  The Holy Spirit has been moving in so many places to give people their own answers on this topic.  The Lord was also at work here among this particular network of church leaders and they were willing to have a Canadian come and expound on this vital biblical topic.

So the drama of verifying that this was a Holy Spirit ‘Go’ was part of the intrigue of this international request.

Beginning in January, 2016, and for the next three months, I continued to research this topic indepth.  I borrowed insights from a number of scholars and authors on this topic and compiled the needed information into a tapestry of words to clearly convey what needed to be covered in this four day conference—which would be interpreted from English to Swahili.

I began the first session at this conference by reading 2 Tim. 3:16, 17, which reminds us that:

“All Scripture is God-breathed and is useful for teaching, rebuking, correcting and training in righteousness, so that the servant of God may be thoroughly equipped for every good work.”

The whole Woman and Man topic is both very serious and yet it is also humorous—since men understanding women and women understanding men has been a hilarious topic to start with throughout the generations!!

Humans have problems dealing with human sexuality.  There is much brokenness in this area, which is part of who we are as humans in a fallen world.  There are only two kinds of humans that God created—male and female.  Christians should be the ones who lead the way in understanding human sexuality and who model what godly living is all about.

Here are some questions that I used to introduce this topic and to stimulate thinking among this inter-denominational group of church leaders:

Even a few decades ago all women wore hats to church and for just going shopping downtown.  What changed?

I then gave my outline and where I was going with this topic.  At first people were curious about this lady speaker from Canada, but after a day of working through the material together, they were keen to track with me through this compelling subject.  Their interest was evident and their desire to learn was key.

The following are the four main topics which we covered:

Why is the ministry and gifting of godly Christian women so often still being prohibited in the Church?

How are women being treated and why?

Where do people get their ideas from?

We are going to look at the TRADITION of Patriarchy in cultures worldwide and see why this belief system dominates.

What does history teach us about the Patriarchy in the Jewish and Greco-Roman cultures?

Next, we are going to take a serious look at the TRADITION of Patriarchy in light of:  What Does the Bible Actually Teach?

Why do some Christians still hold to a Patriarchal View of the Scripture?   Is their belief valid?     [NO!]

Why are there differing beliefs about what the Bible says?

How can we get our own answers on this topic from the Bible?

This should lead us to ask:  What should be the Christian’s belief and practice?

Who are we and What is Our Identity In Christ?

How Can We Be a Part of the Solution by ensuring that Kingdom Principles are HOW we are Motivated in Christ’s Kingdom?

It is encouraging to know that numerous Christian leaders have studied this issue and have changed their minds from a belief in a Patriarchal or a Complementarian View to a Mutualist View of Scriptures.

Lastly, I provided some useful ways that Christians can be part of the solution to this ongoing problem in the church and in the world today.

Here is one illustration that struck a chord with everyone.

Illustration:  So, let’s take a walk together to church.

Men, women, and children are on their way to church.  Everyone is happy and sharing about their lives the past week, with one another.

As they approach the front doors to the church, and the women enter the church, they all stop talking—since the Bible says that ‘women are to remain silent in the church’.  So not wanting to offend God, the Bible, or their families, ALL the women NOW stop talking.

Here are some questions that we might ask ourselves:

So you can see that things are starting to get ridiculous with such interpretations of these particular passages from the Bible.

An image that was a winner at this conference was Vladimir Kush’s sculpture of the Scissors, which I used as an image of male/female unity in Christian marriage and the Body of Christ.     http://vladimirkush.com/gallery-maui 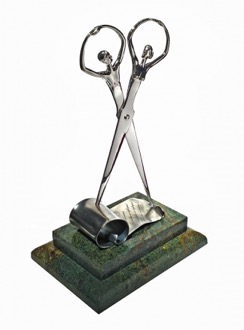 As a friend responded, after seeing this image:  “Such a perfect depiction of Ezer kenedgo!  Seeing those scissors, it is clear that Adam was failing at ruling ‘alone’.  He was a single blade–so he made a ‘stab’ at ruling, but he really wasn’t ‘cutting it’!!!  TWO MATCHING BLADES ARE NEEDED!!”

On the last day of this conference in Kenya, a Visible Application of how this message was impacting these church leaders was when three of the leaders stood on the platform and one of them offered an apology to the sisters–on behalf of all the brothers there.  It was a touching moment.  This humble act was a significant step in their desire to ‘apply’ what they were hearing from God’s Word.   This is how they were prompted to take immediate action on what they were hearing!

It further confirmed to my mind and heart that this email invitation and my entire trip was a God-thing and that the Holy Spirit was and continues to be involved with getting the topic of Biblical Gender Equality established among many more of God’s people–in Kenya and beyond!

There is An Opportunity to Support our Brothers and Sisters in Christ in Africa.

There is much poverty in Africa.  Getting the word out regarding Biblical Gender Equality requires time, energy, and funds.

For those who have a heart to further this teaching in African nations, continue to pray for God’s leading and regarding this open door of opportunity to teach and serve God’s people in Africa.

Two sites which provide Free Articles for personal research are:

Christians for Biblical Equality and God’s Word to Women.